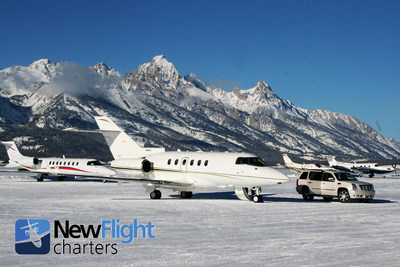 The company features one of the industry’s largest aircraft availabilities, customized private charters with any type aircraft, ratings or more, and a Best Price Guarantee for any charter.

January 2017 charters continue the trend, with a decline in turboprop demand, offset by a rise in jet charter demand overall, particularly in the light jet and large cabin jet categories.

«We saw a definitive move from smaller to larger charter aircraft bookings this year.  The demand moved up the scale,» commented New Flight Charters’ president Rick Colson.  «In addition jet charter pricing improved overall, with an increase in one-way pricing options across many top charter operators and fleets nationwide.»

The company, while seeing growth in charters nationwide, attributes additional results to its specific initiatives in the Colorado and Jackson Hole, Wyoming areas.

Jackson Hole Jet Charter is the company’s local resource for private charter information and flying to and from Jackson Hole and the northern Rockies.  Featured are Jackson Hole specials, regional empty legs, and a regional charter aircraft listing with access to aircraft transient at Jackson Hole Airport.

Launched in 2016, Jet Charter Colorado is the only resource with all 104 charter aircraft based in the state from 34 FAA certified operators, along with one-way pricing aircraft available to and from Colorado.  Featured are all local and regional charter aircraft, discount empty legs to and from Colorado, and the company’s Best Price Guarantee for every charter.  The most popular locales for charter arrivals and departures in the state during 2016 were the Denver–Centennial, Aspen, Eagle–Vail and Rocky Mountain Metro airports.

To view the original version on PR Newswire, visit:http://www.prnewswire.com/news-releases/new-flight-charters-announces-strong-results-increases-in-private-jet-charter-activity-and-demand-year-over-year-300419640.html