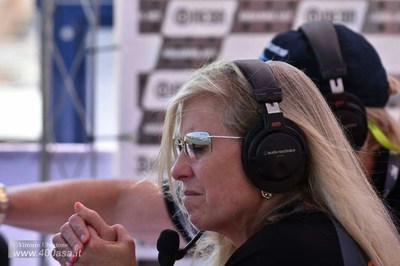 The UIM-ABP Grand Prix of Qingdao, China will be supported by the Haier Group, one of the most well-known brands in China, which is headquartered in Qingdao. The race marks one of the final legs of the international Aquabike competition, attracting hundreds of racers every year. The tour started in Portimao, Portugal this year and will finish in Sharjah in December. The sponsorship by F1H2O racing and the UIM-ABP allows for excellent coverage for this exciting and up and coming sport. With just one more stop left on the tour, racers are pulling out all stops in this world championship.

Dawn Dawson, a former world champion herself, lives in Colorado Springs, and holds the honor of being the first woman to announce Aquabike’s world championship tours.

«It is an honor to be trusted as the first woman announcer for Aquabike. It means even more that this is a global event that is broadcast on such an influential scale and has a large following. I have a deep respect for this event, the promotors and riders, and am looking forward to visiting Qingdao!»

She has announced various international watercross events across the globe since the start of her career, including the 2018 Asian Games. Dawn has been announcing with Aquabike since 2016.

Aquabike’s coverage of the Grand Prix of Qingdao will be available on their website and Facebook page. Tune in to hear Dawn’s voice, and stream breathtaking Aquabike racing, from Thursday 10 Oct to Sunday 13 Oct.

ABOUT THE AQUABIKE WORLD CHAMPIONSHIP

The UIM-ABP Aquabike World Championship is the most acclaimed and prestigious international series promoting personal watercraft in a competitive racing environment, and one of the fastest, most spectacular, demanding and entertaining sports on water. 2019 sees the Championships embark on its 25th season since being sanctioned in 1995 by the Monaco-based Union Internationale Motonautique (U.I.M.) the World Governing Body for Powerboating.