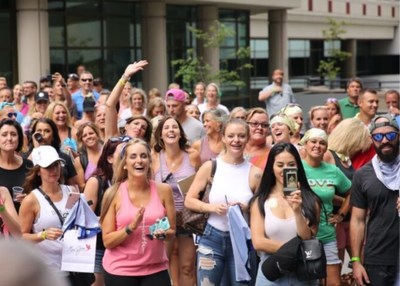 Brand Promoters qualified for the retreat by meeting the requirements that set them among the top performers in Le-Vel’s independent sales force. World-renowned guest speakers, Brian Tracy and Erin Gargan King, spoke on business leadership and how to increase influence through smarter digital persuasion. The company’s Co-CEOs Paul Gravette and Jason Camper, and Le-Vel President Drew Hoffman, delivered motivation, training and vision into the future direction of the business to this select group of leaders.

Afterwards, attendees were put into teams to compete in a fast and furious scavenger hunt around the Mile-High City. These highly competitive groups took to the streets with team building challenges at many of the city’s most popular landmarks. Following the scavenger hunt, teams were awarded medals and were treated to a celebratory cocktail hour with a surprise twist – a Maui Jim gift fitting where attendees selected their very own sunglasses to take home.

One of the most exciting moments of the retreat was the official debut of the newest two products in the THRIVE SKIN line. THRIVE SKIN is an industry-first approach to anti-aging based on exhaustive research and testing, superior ingredients, and an innovative formula and delivery system. The Infinite Activated Charcoal Mask helps absorb skin impurities and filter or balance oil and water levels for healthier, more vibrant skin. The Infinite Daily Detox Purifying Bar is a paraben- and sulfate-free daily cleaning bar that neutralizes free radicals, relieves dry skin and deeply cleanses impurities. Retreat attendees were among the first to try these two new products at interactive beauty counters that allowed them to experience the Mask and Bar firsthand, then share their results via social media with the thousands of Brand Promoters on their teams at home.

«Our first Leadership Retreat was designed to recognize the efforts of Le-Vel’s outstanding Brand Promoters, provide them with top-notch leadership training from our executives and special guests, and inspire them to take their businesses to the next level,» says Co-CEOs Jason Camper and Paul Gravette. «These three days also were an opportunity for us to reflect on how far we’ve come in just seven years as a company and as a global movement of health and wellness – and catch a glimpse of where we’re headed.»

Founded in 2012 by Jason Camper and Paul Gravette, Le-Vel formulates and sells health and wellness products and skincare. In 2019, less than seven years after the company’s inception, Le-Vel reached a milestone of $2 billion in lifetime orders.

In April 2019, Le-Vel launched its THRIVE SKIN line, which has been a wild success and provided amazing benefits to THRIVERS around the world. Le-Vel has over 10 million Customer and Brand Promoter accounts and currently ships within the United States, Canada, Australia, New Zealand, the United Kingdom, and Mexico.