Experience the King Like Never Before With ‘Elvis Unleashed,’ in Movie Theaters Worldwide on October 7 & 10 Only

DENVER, Aug. 16, 2019 /PRNewswire/ — Elvis Presley returns to big screens across the globe this fall with the new music special, «Elvis Unleashed,» featuring previously unseen footage on movie theater screens of Elvis as he filmed the iconic «68 Comeback Special.» The two-day cinema event, which includes outtakes and performances that reveal a new side of the King, will air in cinemas on October 7, with an encore screening on October 10. 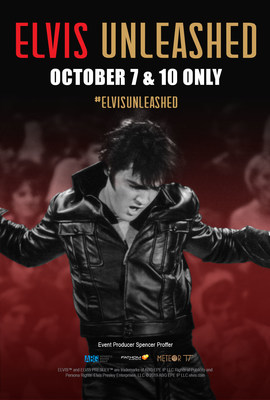 Each screening will include a new 30-minute segment with Los Angeles Times lead music writer Randy Lewis in conversation with actor Dennis Quaid, rising pop/country artist Jade Jackson and the esteemed director and producer of the «68 Elvis Comeback Special,» Steve Binder, to discuss Elvis’s life and legacy. Quaid and Jackson are set to perform some Elvis classics, while Randy Lewis discusses the behind-the-scenes interactions that Binder had with Elvis and his manager Colonel Parker, as well as celebrating the King.

This brand-new content is produced by Spencer Proffer, CEO of Meteor 17, and Dave Harding, in association with Authentic Brands Group.

Tickets for U.S. screenings of «Elvis Unleashed» can be purchased at www.FathomEvents.com and participating theater box offices.

Fathom Events will present «Elvis Unleashed» in more than 800 U.S. movie theaters on Monday, October 7, and Thursday, October 10 at 7:00 p.m. local time (both dates), through Fathom’s Digital Broadcast Network (DBN). For a complete list of U.S. theater locations, visit the Fathom Events website (theaters and participants are subject to change). International cinema locations and ticket-on-sale dates will be announced at a later date.

«This cinema event showcases Elvis as both a legendary performer and a charming, charismatic presence behind the scenes,» said Meteor 17 CEO Spencer Proffer. «With my partners at Fathom Events, we are excited to bring together his many fans in theaters across the world to celebrate his lasting impact with never-before-seen moments and performances.»

The «‘Elvis ’68 Comeback Special» was a major milestone in Elvis Presley’s storied career, marking his first live television performance in seven years and pioneering the «unplugged» performance style with an acoustic set. «Elvis Unleashed» captures the spontaneous moments and stories behind the legendary special, and sheds new light on Elvis as a cultural icon.

«We are thrilled to share this wonderful tribute to Elvis with his fans around the world,» Fathom Events CEO Ray Nutt said. «This special not only provides a behind-the-curtain look at Elvis’s most memorable live performance, it also explores his impact on today’s music culture and performers.»

About Meteor 17 and Spencer Proffer

Headquartered in Los Angeles, this convergence and production venture is helmed by innovative media and music producer, Spencer Proffer. M17 is producing and is developing an ambitious slate of projects across music, TV, film, Internet, live event, and other platforms, integrating brand marketing and music as organic components. M17 is a full service organization that actively participates from conception and architecture through all phases of deal making, production, marketing and distribution entities. www.meteor17.com.